A "no R just C" preamplifier?
A few years ago I got some ludicrous resistors from Dave Slagle. Essentially these were just long thin copper wires spooled to match the needed resistance. A bit unhandy to mount but I found a way by putting the spools between two wooden discs. I use them to bias a type 10 at 20mA. Supersound. So I came to the idea to ask Dave if he could make me some for the AD1. A resistance of 1K3 at 35mA, could that be done? He promptly reacted and wrapped his mind around it and came with a solution. You can read about it on his blog. He calls it the worst resistor ever. Well, read it and you get the idea.
On the blog article he made an interesting statement: "Well if you look at it on the most basic level a resistor is simply a really crappy conductor. Given the extremes we go to for the quality of our signal wiring it isn't beyond reason to me that a longer length of a superior conductor with all of the baggage that it comes with may be better than an alloy specifically done to impede conductance." Yes! I like that and it must be true, it must be..

Installing them.
The US Postal service did not take long to get the package to my address 😷. I made a photo with a AA battery for size comparison. 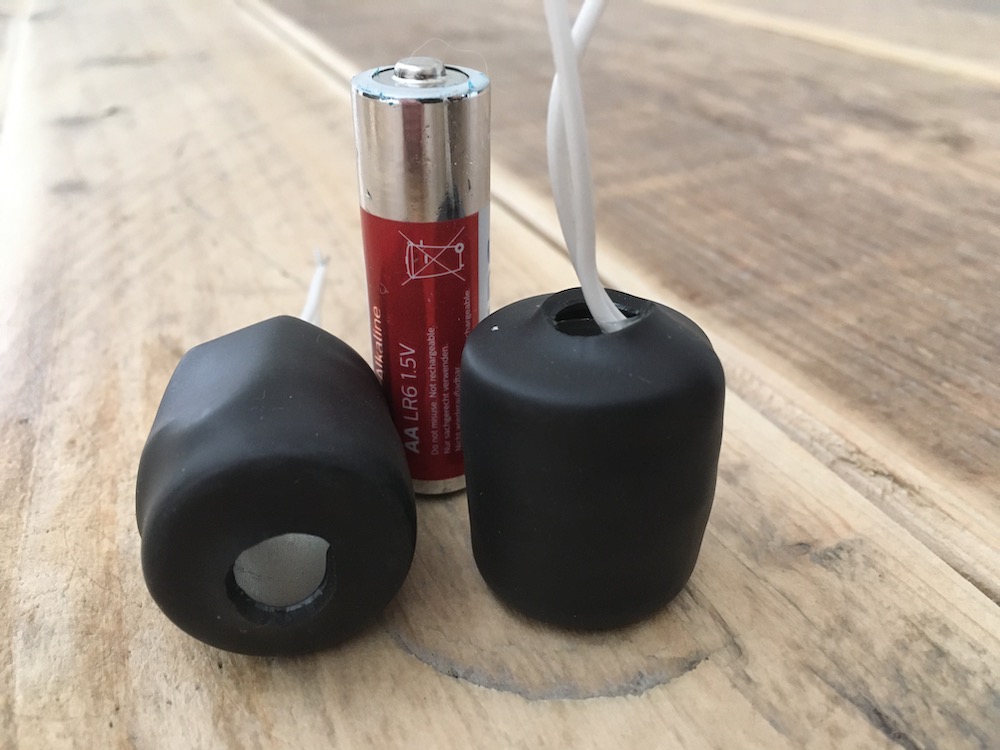 They are wound on a hollow aluminium tube for cooling and finished in black heatshrink. These are temperature controlled, meaning that with temperature differences resistance will fluctuate as well. So mounting vertically for airflow through the resistor. Stable temperature equals stable resistance. Even though it is a tight fit, I managed to do this. The underside of the amplifier is open and next to the sockets are ventilation holes as the sockets themselves are not round and mounted on rubber standoffs. So all seems to be well. Let's have a look. 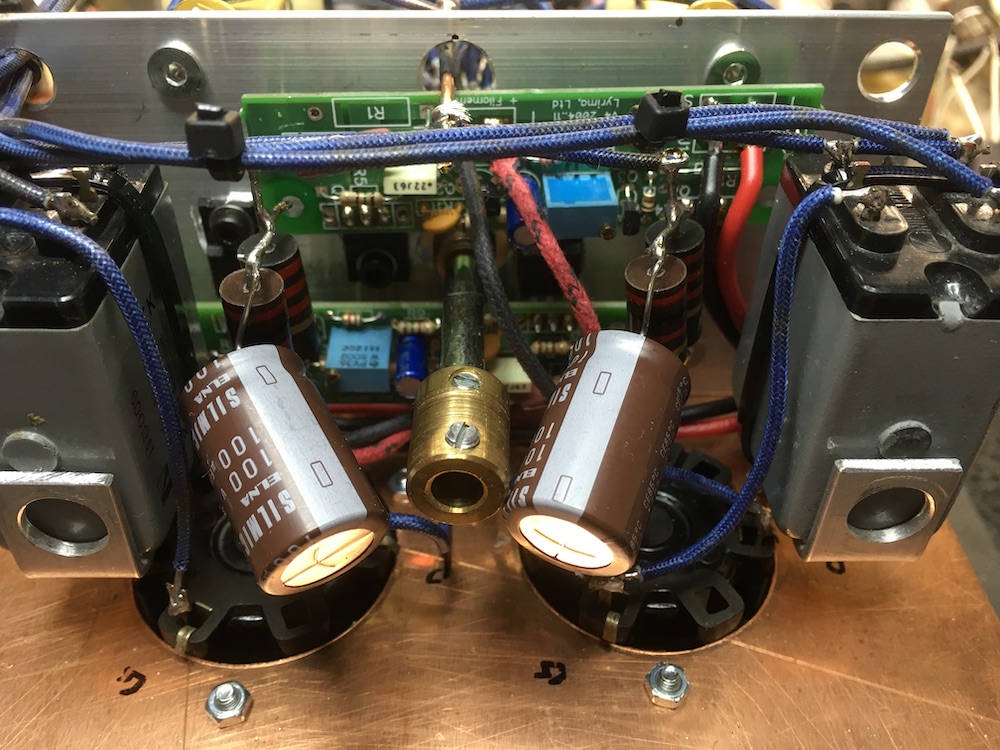 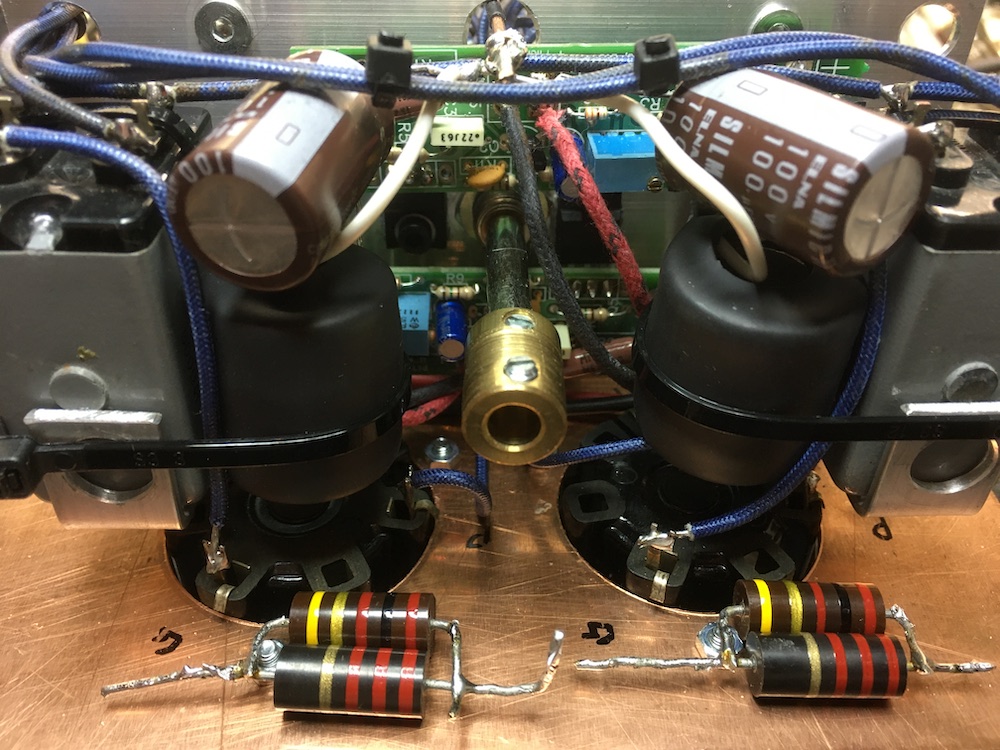 Putting power to the amplifier confirms that the AD1's run a bit hotter compared to normal operation, but already after 10 to 15 minutes this stabilises to the chosen operating point. Since there is some headroom for the tubes, power supply and line-out transformers this is not at all a problem (talking about a rise in current of <5 mA per AD1). Within the normal warming-up phase these are also up to specification. So let's put them into business!

Listening..
Do they need to run in? Oh yeah. At first use they sounded horribly sibilant. Luckily that kinda disappeared within the hour.. to come back again.. and disappear again.. The intervals got smaller and the difference as well. After about five hours of music listening this effect was not noticeable anymore (or I got used to it 😀). Also the low end response needed some weight, at least compared to the Allen Bradleys. That also needed some hours to happen. I had to wait for these two aspects, but the one thing that was there from the beginning, is an incredible clean mid. The tiniest details were better to follow, micro information was plenty. As example, at Roger Waters Amused to death there are these Q-sound effects which emerge to the left and right from you like a running television program or voices telling stories. Never before it was so easy to clearly understand what was played or said. So more detail and thus analytical? Remarkably yes, but with no negative effects on tone or timbre (the real-factor). Also voices get more throat with more harshness on the edges, just like how harsh a voice can sound in real life. Some music fooled me several times as I thought there was someone ringing the front door what always annoys me when I am listening music. Imagine my face when coming to the door and no one is there and then realising that a doorbell-alike sound was in the music. Cool. So now I have to pay real good attention not to miss someone at the door.. It is really remarkable how revealing these crazy resistors are. Hearing this, Dave must be right with his remark about resistors being crappy conductors..
If you like contemporary music, the ECM label has up 'till now released three albums by Nick Bärtsch, phenomenal music and well recorded like all ECM-records (well, the album Awase being a little less in quality, imho). On the album LLyria suspense is build up using drums and percussion, that suspense becomes even more palpable because of the revealing aspects of these resistors. This effect is hard to describe, as it is not about detail like more clarity on vocals, but about microdetail that adds to the senses. As said, hard to explain but the mind kicks in immediately followed by the body. Yes, this is emotion, what music is all about. And I can go on, on Manhattans Jazz Quintet's live at the Pit Inn, the sax and trompets get that live-like glare on copper/metal when pushing the instruments to the limits. Just like with live performance when it becomes almost not pleasant but still is.. tapping your feets..

Damn, if they don't sound good - But they do!
This should be a no-brainer. If you like your tone and wish for more detail without losing that tone, I would suggest to drop Dave a line (or two). I have no clue up to what resistance and dissipation these can be built, but reckon that everything below 1K3 and 35mA dc-current will be possible. And the price? Well, what is a realistic price for something that is custom built? If you look at boutique resistors like Audio Note silver tantalums and Duelund carbon cast resistors, these are pricey and are machine made. So how much for these? Well, ask Dave, these have to be built-to-order anyway. I heard him say anywhere around $50 to $70 a piece. Expensive? Yes, lots of money for a resistor, but this for sure is not a crappy conductor..